Barranco is another district of Lima, neighbouring Miraflores and is described in various publications as being bohemian and home of many Peruvian artists. For me, and not wishing to appear too much of a philistine, it was somewhere to walk to and maybe take some photographs. I was invited to accompany Mike, who runs the South American Explorers club here in Lima. He likes to go for a walk regularly, for exercise and I need to keep building my strength for challenges I may face later in my travels.

From my penthouse to Barranco and back, I clocked up almost 14kms. Fortunately, although it was somewhat hazy,

the sun was shining and it was a good day for walking, if there could be such a thing. We walked out of the centre of Miraflores towards el Malecón, where I walked last weekend and headed south. It was not as busy as last Sunday but I imagine many of the people were working. They do seem to work very long hours here.

It must have taken us an hour and a half to reach Barranco, stopping at  Larcomar

on the way for a pit-stop. Consisting of shops, bars a cinema and the all important servicios, Larcomar is built into the cliffs facing the Pacific Ocean. At the oceanfront, Barranco and Miraflores are separated by a gulf

, so you have to walk inland a little way to cross a bridge. I didn´t mind on the way there but I resented those extra paces on the way back.

Apparently, Barranco was very fashionable, a hundred years ago and more. An affluent area and a popular place to live and to visit. Many of the buildings have fallen into various states of disrepair since though, as Barranco was largely deserted it seems by those wealthy residents. 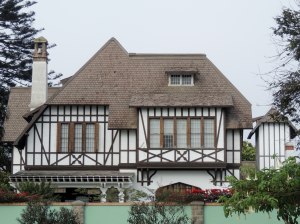 More recently, the influx of artists and artisans, has seen some restoration and it is a very popular place for evening entertainment, with a number of restaurants and clubs. There are some rather stark images between the carefully restored and the sadly neglected but there are also some quaint reminders of times gone by. Although some could have you wondering if they were coming, 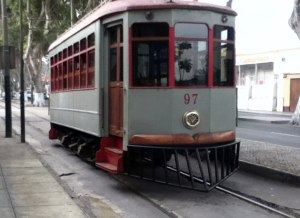 , might look even less dilapidated if it were not for it´s rooftop scavengers who are probably stripping the roof quicker than it can be covered. 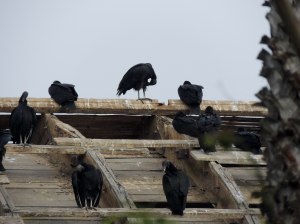 After crossing the Bridge of Sighs, I inadvertently got into a conversation with a guitar playing local busker, who was waiting for his percussionist, who had been persuaded to take a photograph of a couple next to a statue. It was not really a conversation because his accent was so strong, I could not make out a single word. It has been quite a while since that has happened. It soon became apparent that he wanted to perform for us. I declined and Mike and I headed off, only to be pursued by the dubious duo. They had us boxed in as we were headed for a dead end, so we gave them a few coins and they played for us.

Finally managing to understand their accent, when they asked us where we were from, I replied, “Inglaterra”. The drummer responded straight away with his one word of English, “Beckham”. It made me feel quite nostalgic for the good old days when most non – English speaking people knew two words – Bobby Charlton. I pointed out that David Beckham and I have something in common, we are both recently retired. Chuckles – at least they understood me.

It was time to head back to Miraflores and I have to say, I was glad to get back. It was a great walk though and another is planned for next week.

One thought on “Barranco”